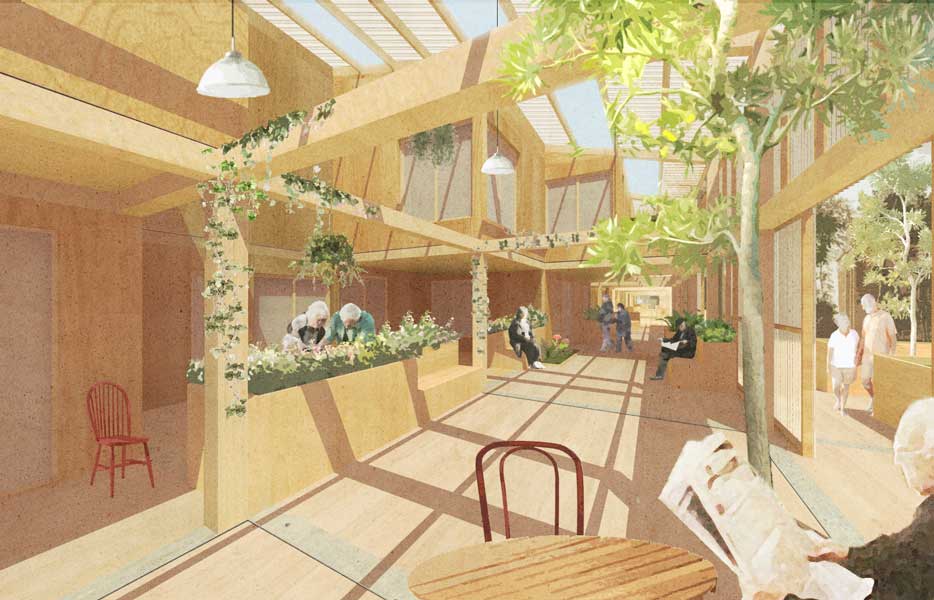 Posted at 11:43h in Architecture by Alex Michon

The National Custom and Self Build Shoestring Ideas Competition has been running for 5 years. This year’s entrants were challenged to design a self build ‘granny annexe’ that could be easily constructed for less than £40,000.00. They also had to show how 30 of the buildings could be arranged to form an innovative low-cost retirement community.

Towards a Silver Architecture

Help the aged,
one time they were just like you,
drinking, smoking cigs and sniffing glue. Help the aged,
don’t just put them in a home,
can’t have much fun in there all on their own.

With falling birth rates, slowing population growth and greater longevity over the next 20 years, the older demographic is growing rapidly as a proportion of the population. Never has there been a more pertinent time to come up with what geriatrician Louise Aronson has dubbed “silver architecture…..to build more homes, and public buildings that are well suited to older people’s needs…Silver architecture and design aren’t about indulging a special interest group. They are about maximising quality of life and independence for a life stage most of us will reach.” 1

At the outset, the two most pressing issues within a retirement community were identified by the team as being loneliness and care provision. Darran Levins says “our intention was to create an environment of mutual assistance and cooperation where the care provision and loneliness were taken care of by the community themselves, so the question was how to create that?”

Central to the team’s considerations was that the building should not feel institutional. Early on the architects were inspired by the Almshouse movement as Almshouses often provide the amenity of a courtyard garden space facing onto a public street. As Graeme Doctor says “we took from this the idea that our homes should not be tucked away or inward facing and that they should be very much part of the wider community’

Thus, their building design proposes a façade continuous with the local street elevation and offering access from it directly into residents’ homes.

This idea of the relationship between public and private space formed an important leitmotif for the project both for within the retirement area itself and for its relationship to the outside world. A jumping off point was the idea of the classic, as Graeme Doctor calls it, ‘Coronation Street’ model of the terraced street with the image of the alley-way between the back yards of houses as “a good example of semi-private space onto which the domestic life may overlap with the communal and within which a community may thrive”.

Explaining the team’s ethos, Darran Levins states ‘we started by looking at re-balancing the private/public space typical in a retirement community and maximising the shared areas that we could provide. Along with the private housing units we created a semi – private semi -public street at the back of the retirement terrace just for the residents to engage in incidental chit-chats and interactions that we felt were the basis of community. Shared spaces could include dining areas, reading rooms or workshop / hobby areas etc. However, there was always the option of retreating to ones own private room if solitude was sought’

The design also includes a lean-to cover on the residents’ communal promenade which was designed to provide a safe, sheltered passage between residents’ homes. The team decided on a lightweight timber and polycarbonate cover suitable for the vagaries of the British weather. This residents’ promenade is at the heart of the community and includes raised planters for communal gardening and plenty of seating that allows for yet more opportunities for stopping by for a quick chat or a moan about the poorly flourishing azaleas.

Another important consideration was the differing needs of the residents. Those who were more able and mobile could occupy the ground floor units accessible to the street whilst less able residents would be housed on the first floor. But it was not the intention that they would be shut away and so their units were designed so that they overlooked the street below and were also accessible to the breakout areas.

Taking the requirement of low cost housing provision into account, the units were designed to be arranged over two storeys in order to save on the cost of foundations and roofing. It was decided that the number of units required could be provided within just a quarter of the site thus allowing the remainder to be used to fund the construction of these or additional units.

“The brief also called for us to achieve Lifetime Homes Standards and Passivehaus if possible” explains Graeme Doctor “so in making our first moves in laying out these apartments we had to think about how they could be adaptable for lifetime use which is what the Standards require. We were thinking about things such as wheelchair access and also space for grandchildren visiting and how we could incorporate these things into the scheme. We opted to use SIPs (structural insulation panel) construction within a 4 metre grid for the external wall of the residences. Sips being relatively inexpensive and also compliant with Passivhaus whish is a rigorous voluntary standard for energy efficiency.”

Summarising the competitions aims Graeme Doctor notes “Right there in the first sentence of the competition brief they were asking for a unit that could be replicated over any site, a unit that could be built at the bottom of a garden or put together in some way, so we feel we have created something that could be used to plug a gap in a street and create a street frontage or rearranged or phased in some way which could be quite dense, thereby creating an economy of scale that can help fund not only the building of the project but also the shared services on site”. Residential provision for senior citizens has at last moved out of the twilight zone. In twenty years time the ‘grannies’ of the future will be the disruptive hippies and punks of yore and with both generations familiar with the ‘be reasonable demand the impossible’ 2 counter cultural philosophies it will be interesting to see what kind of homes they will not only be demanding but possibly creating for themselves.

What 318 Studios’ proposal, Green House, has shown is that good design does not necessarily rely on a large budget. Attending the competition Awards ceremony at Grand Designs Live in Birmingham in October (and thus missing the first day of the office trip to Helsinki) Darran Levins says that “our proposals were highly praised by the judges, they called it a simple yet intelligent scheme that did not take a large leap of imagination to imagine that it could be built”.